The very extensive electrical installation consist of more than 40 separate circuit breakers and is supplemented with Home automation.

The Main counter supplies 3 phases of 400V and 40A. This to assure that enough electricity will be provided at any moment during the mains uptime. 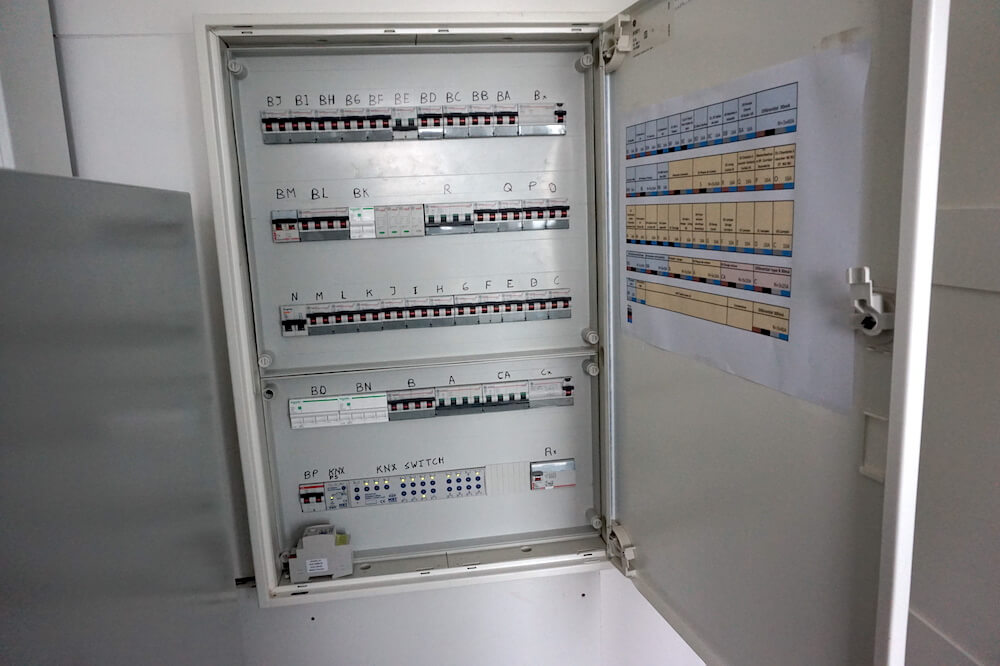 Each room has an average of 4 separate sockets, at least one of which has multiple sockets. In total there are over 110 outlets in the house alone. This will minimize the need for multi-blocks and extension cables.

About ¾ of these sockets can be switched on and off per room via the home automation switches so that there can be saved on standby energy consumption during the night or the holidays when the house is uninhabited.

The outside LED lighting surrounds the house and the garage and is activated via twilight and movement sensors. At dusk, the LED cog lights up and stays on until it is light again (very low energy consumption). This creates a cozy outdoor atmosphere and creates the impression that someone is always present. When a movement is detected, the larger LED lighting illuminates to create visibility. This lighting also contributes to the safety of both residents and visitors. Unwanted visitors can be deterred.

The house, and the garage are fully equipped with LED lighting.

Over 110 lighting points have been built into the ceilings of the house. All the LED lighting for every common area (such as hall ways, toilets, bathrooms, laundry room, cloakroom and dressing room) are automatically switched on and off via movement sensors, whereby the duration and light intensity to trigger the on switching and the duration can be adjusted. This contributes to general energy savings as the lighting can no longer remain on unnecessarily.

In almost all other rooms, the lighting is switched on via the intelligent home automation push switches. There are two lighting circuits per room. One group of different LED lamps can be dimmed. The large LED lamp can be switched on / off.

All LED lamps that are built into the ceiling are surrounded by a mini housing of 16 x16 x12cm made of MGO plates. As a result, they are completely separated from the wood wool blown into the ceiling and the heat generated by the lamp can also be controlled.

The home automation (MDT with KNX protocol) provides extra comfort so that via the intelligent programmed switches:

Each push button has its programmed function. Should there be a need for additional functions, these can be programmed afterwards.

More and more people and children appear to be electro sensitive as such the electro smog minimization is being more and more a must.

90% of the electricity cabling consists of screened cables (metal earthed sheath wraps the power conductors) of type XFVB. This for both the sockets and the supply cables for the lighting.

As a result, the electro smog caused by the electromagnetic radiation generated via the live power cables is reduced to zero.